The past few months we have seen several changing of the softball guards, from the abrupt departure of Auburn head coach, Clint Myers, to the more recent controversial release of 16-year ULL head coach, Michael Lotief. Whenever these huge opportunities open up everyone seems to hold their breath waiting for the next big move.

The dust has now begun to settle and we have a pretty good idea of what the 2018 season will present. So, how did we get to where we are now? Here’s a long story made short. When Clint Myers unexpectedly resigned as head coach of Auburn University in late August, the University had to scramble. Fortunately for them, during Myers 4 years at Auburn he catapulted the softball program up the national ranks making the Tigers position highly sought after.

After 5 very successful seasons at JMU, head coach, Mickey Dean, applied and was awarded the position at Auburn. Dean then began to put the pieces of the staff together, one of those being the announcement of Gerry Glasco, former Associate Head Coach at Texas A&M, as Auburn’s new associate head coach. All seemed settled in the SEC. That is until the sudden firing of long time ULL head coach, Michael Lotief.

Michael Lotief had spent 16 seasons putting the Ragin Cajuns on the national map with their very unique split-grip and torque type swing. Coming out of the Sun Belt Conference, the Ragin’ Cajuns have seen the post season in 24 of the past 25 seasons. They are the type of team that should see post season every year and can run deep into the tournament each year. For these reasons, the position availability sparked a lot of interest. Who applied? More candidates than we’d probably think. So who snagged the gig? Gerry Glasco of course. Definitely an interesting turn of events but not surprising. Sometimes opportunities come at inopportune times and if the door closes it may never open again, so Glasco goes to ULL.

So that’s where we stand right now. Now you might be wondering, “Who is this Gerry Glasco?”

A high school baseball player, Coach Glasco got his start in softball with his 3 daughters. A coach at Johnston City High School for 7 years he started the Illinois Southern Force organization where he was the head coach of the gold team from 2001-2008. It was from there that Glasco got picked up by the University of Georgia and began is 6 year run as assistant coach and associate head coach of the Bulldogs. In the fall of 2014 he accepted the associate head coach position at Texas A&M where he spent 3 years before the Auburn and Louisiana Lafayette juggle.

His resume is impressive but what he has been able to accomplish along the way with the athletes he has worked with is even more so. Coach Glasco has the ability to drastically change an offense in a single season. He has proven that time and time again. For a University of Louisiana Lafayette team who is understandably confused and in transition, yet oozing with potential, finding a coach like Gerry Glasco should be bright light in an otherwise cloudy situation. To read more on the hiring of Gerry Glasco and his bio please read here. 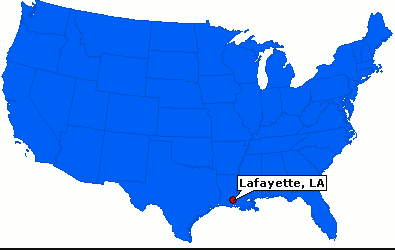 For more on the University of Louisiana, Lafayette you can visit their website at www.louisiana.edu